The country of Armenia

Armenia is located at the heart of the Caucasus Mountains, between the Caspian and the Black Sea. The state territory comprises around 30 000 square kilometres (11 600 sq mi) and borders the countries of Turkey, Georgia, Azerbaijan and Iran. Armenia is a very mountainous country, with over 90% of its territory situated at 1000 metres (3280 ft) above sea level or higher. The mean height above sea level is 1800 metres (5900 ft). Armenia's highest peak is the extinct volcano of Aragaz at 4090 metres (13 400 ft) above sea level.

Armenians are an ethnicity who live spread out across the entire wotld on account of their tragic history. Today, around 3 million Armenians live within the Republic of Armenia, and around the same amount in the Diaspora. Around half of the 3 million within Armenia live within the capital city of Yerevan.

Between 1898 and 1918, around 1.5 million Armenians were deported, tortured and executed in Turkey. This first genocide of the 20th century is still only recognised by few countries and left deep scars in the Armenian people.

In 1988, Armenia was hit by a severe earthquake, the after-effects of which some regions are still struggling with. After the collapse of the USSR,  the region also sufferred a grave economic crisis. Most of the 3 million Armenians make their living through agriculture (mostly based on the cultivation of produce and tobacco) and very few exported goods (copper, bauxite, gold and molybdenum). The yearly GDP per capita in 2004 was around 790 USD.

Christianity is deeply rooted within Armenia and plays an important role in the identity of the Armenian people. In the yeard 301 AD, it was the first nation in the world to proclaim Christianity as its official state religion. 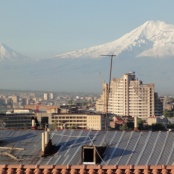 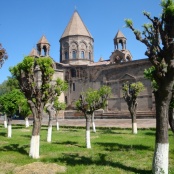 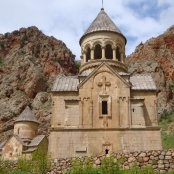 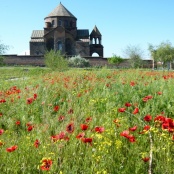