As a part of the world's largest non-governmental organisation for children and youth, the YMCA/YWCA Switzerland has close connections to various international partner organisations. As YMCA/YWCA Zurich, we participate in this international collaboration with our local-to-local partnership with the Spitak YMCA in Armenia.

Spitak YMCA is one of six local YMCA groups in Armenia and offers various activities for both children and adolescents. Their offers, which incule a daycare centre for preschoolers, english and computer courses, a puppet theatre, Ten Sing (a youth choir project), sports and scouting groups, are continuously being expanded upon.

In order to further develop its offers, the Spitak YMCA needed a new meeting centre, which was planned and developed as a joint project together with the YMCA/YWCA Zurich. In May 2010, the "Home for Future" celebrated its opening. This has made it possible for the Spitak YMCA to offer all of its activities in a self-sustaining fashion despite challenging circumstances in Armenian society, to increase the amount of their beneficiaries and to offer their services to the entire Spitak region. Their investment into society as a whole has greatly paid off. The government, the population and the Spitak YMCA see the "Home for Future" as a symbol and a meeting point for the young generation, as an open community centre in the heart of the community.

History of the Armenian partnership

Our partnership with the Spitak YMCA began in 2001. Learn about how everything developed here.

In the year 2000, the members of the YMCA/YWCA Zurich decided at their general assembly to initiate an international partnership. In the name of solidarity and charity, and as a part of the worldwide YMCA and YWCA, the idea of supporting another YMCA organisation in a foreign country was born.

In cooperation with Horyzon, the international development and aid organisation affiliated with the YMCA Switzerland, many possible options were considered. The Spitak YMCA was selected as a possible partner and suggested at the YMCA/YWCA Zurich's general assembly in 2001. Emile Stricker, director of Horyzon at that time and in charge of the YMCA Europe's field group for Armenia, was instrumental in establishing the partnership.

A few years earlier, Horyzon had already organised camps for adolescents in Armenia. Because of this, they were already in contact with people and familiar with the societal situation in Armenia.

The acceptance of the board's proposal at the general assembly in 2001 is the cornerstone of our partnership with the Spitak YMCA today. That the proposal was accepted unanimously was no doubt to do with the impressive presentation held by Emile Stricker, who related his earlier experiences in the country. Other deciding factors were the deep roots of Christianity within Armenian culture - as in the YMCA/YWCA Zurich - and wanting to continue the tradition of Armenian aid from Switzerland. This tradition began during the years of the Armenian genocide and has continued until the present day.

As easy as the decision itself seemed to be, the practical implementation of the partnership proved to be far more of a challenge. How to start a local-to-local partnership? What expectations are there? What potential? How can we ensure that the partnership is based on equality, implemented on a level playing field?

A first step was made on the Armenian side when the YMCA/YWCA Zurich was formally invited to attend the international "ECHO" festival ("Exploring Christian Heritage Origins"), celebrating 1700 years of Christianity in Armenia. This festival took place in September 2001 at Lake Sevan and offered an ideal opportunity to make contacts and visit our new partner country at the foot of Mount Ararat.

As none of the board members or employees were able to attend the festival, the scope was widened and the suggestion was made to Adrian Künsch, then chairman of the board of the YMCA Altstetten and volunteer at the YMCA/YWCA Zurich.

In September 2001, Adrian travelled to Armenia as the sole representative of the YMCA/YWCA Zurich, in order to take part in the ECHO festival and to get to know this country, its people and various local YMCA groups. In long discussions with Hayk Khachatryan, then in charge of the Spitak YMCA, they clarified mutual expectations, discussed the potential of working together and formulated visions.

As an experienced scouting and Ten Sing leader and training supervisor, Adrian conducted several workshops in Armenia. Soon, the idea of a national training week for leaders of Ten Sing groups in Armenia was born.

In the course of only a few days, a young leader from Spitak was invited to Switzerland to visit the "Ten Sing Seminary 1", where Adrian was an instructor.

So it happened that Adrian was able to welcome then 18-year-old Lusine Poghosian as the first Armenian volunteer to Switzerland, not even ten days after his own arrival back home. Her visit to the "Ten Sing Seminary 1" and later the fall camp of the YMCA Altstetten was a valuable experience for all involved. Less than a month after her visit, the first national Armenian YMCA training week took place, led by Lusine.

Adrian recounted his experiences in Armenia at an information event in November 2001. It came as a surprise to everyone that a few young people with Armenian roots joined the familiar faces at Cevi Zentrum Glockenhof that evening - another reason that our partnership grew so strong so quickly.

Read about all our past events here...

The Armenian partnership team of the YMCA/YWCA Zurich is made up of volunteers who organise events in Switzerland and Spitak.

This includes sponsorship events such as the yearly soccer tournament Kick for Spitak, various events about Armenia, and coordination of visitors from Armenia to Switzerland and vice versa. You can learn more about our work and events under the "events" section of this page.

The partnership team meets up at Cevi Zentrum Glockenhof around every three months.

We're always looking for new members! You're very welcome to come and meet us if you're interested - get in touch at armenien@cevizuerich.ch

These are the current members of our partnership team: 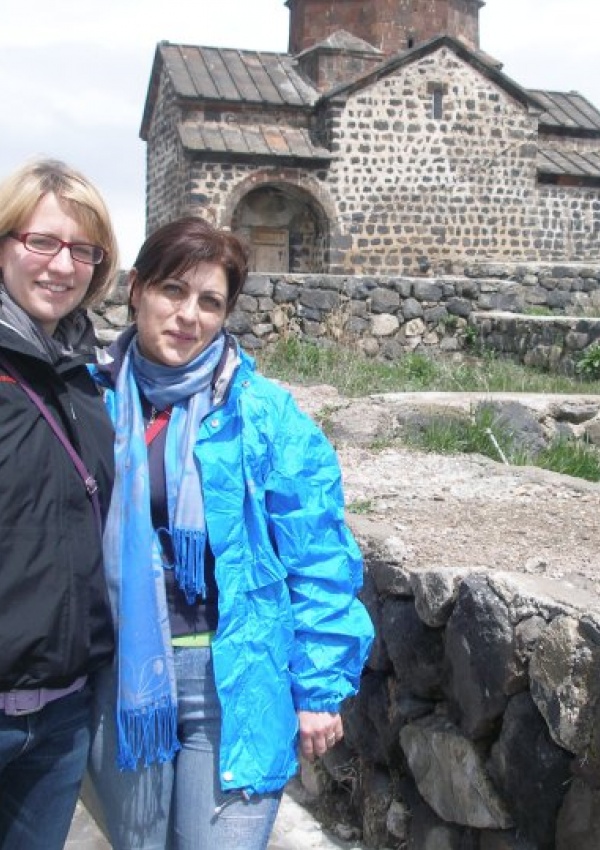 Julia Möckli
Employee at the YMCA/YWCA Zurich, responsible for the Armenian partnership

It was in summer of 2007 that I first became acquainted with Armenia and Armenians: I travelled around this fascinating country for four weeks. There, I was able to help out at the Spitak YMCA's summer camp and also saw some of the country's most impressive sights. Throughout my stay, I was able to enjoy the Armenians' cordial hospitality.

From 2009 to 2012, I was responsible for coordinating the Armenian partnership at the YMCA/YWCA Zurich. During this time, I was able to meet many Armenian friends as they visited us to Switzerland, and I travelled to Armenia a few more times as a tour guide for our educational trips to the country.

After these three years as a volunteer, I rejoined the YMCA/YWCA Zurich in March of 2015, this time as an employee. Besides assisting the general managers, coordinating the Armenian partnership is still an important part of my work. 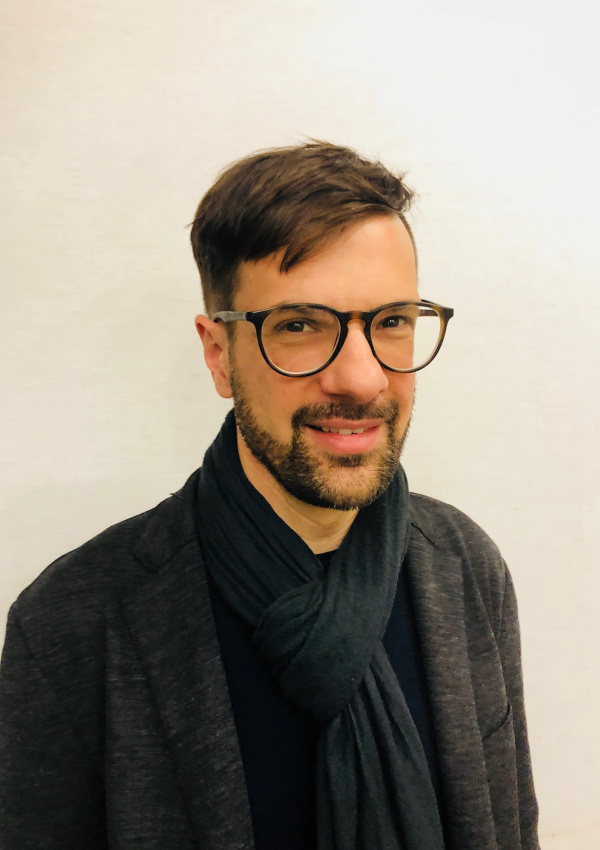 Even though I am Armenian, the first time I heard of the Spitak YMCA and went to Armenia was in 2007 and 2010, on one of the YMCA/YWCA Zurich's educational trips. After these visits, I wanted more! In Spring of 2011, I spent all of April in Spitak. Shortly after that. I was invited to join the Armenian partnership team in Switzerland. There, I told everyone about my inspiring visit to Spitak. I joined the team for good after that. I'm proud to be a part of this team, and to be connected to my Armenian roots this way. 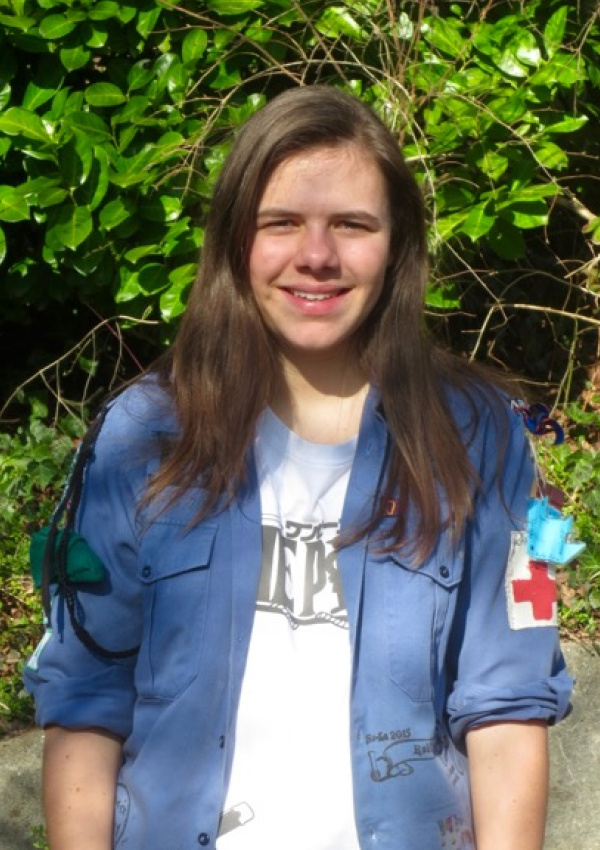 I've been a member of the YMCA/YWCA Zurich 10 for over 12 years. Today I am that YMCA's leader and a member of the Armenian partnership team. In the last few years, we were able to have Armenian guests in three of our summer camps, whee we made lasting, close friendships. In summer of 2014, I took a trip to Armenia for two weeks and was inspired! I joined the partnership team in order to support the Spitak YMCA and to keep in touch with the friends I've made. 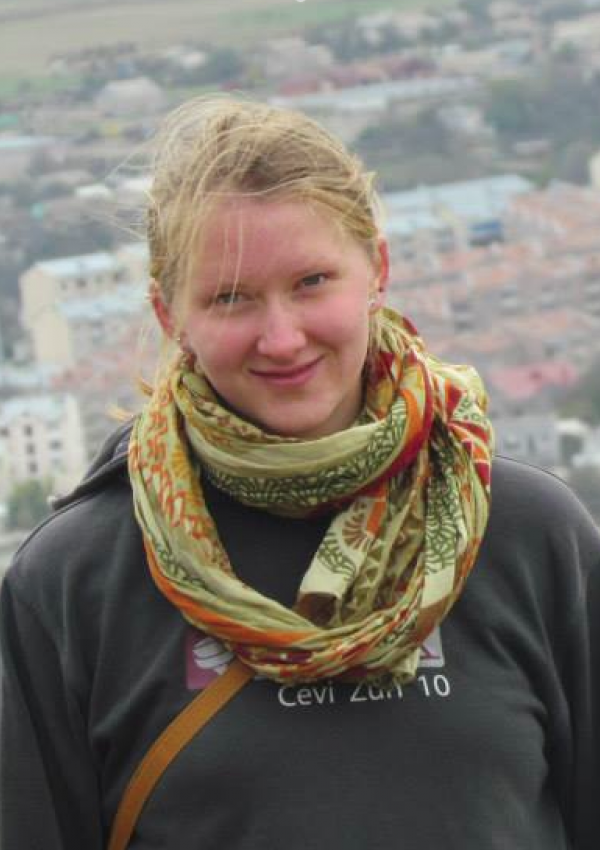 I've always loved joining in the sponsorship events for Armenia with my YMCA group, such as the Run the Hope or Kick for Spitak. But I didn't know a lot about the Spitak YMCA and the partnership until two people from there joined in one of our summer camps in 2011. A year later, I visited Armenia with others from my YMCA group and took part in the Spitak YMCA's day camp. I want to keep in touch with the people I met there, and to do more for them than take part in the sponsorship soccer tournament once a year. I finished school in 2014 and then volunteered in Spitak from December 2014 to January 2015. 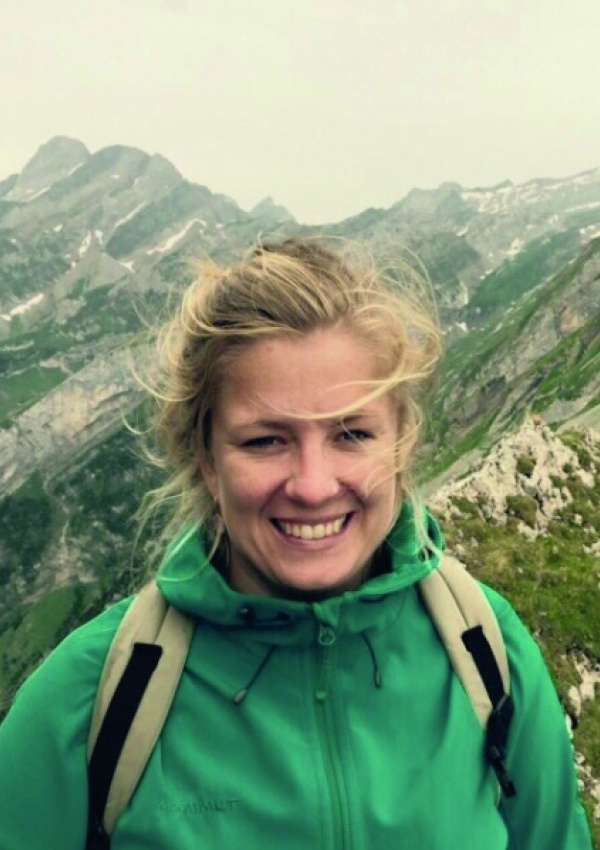 My name is Alena and I've been a member of the partnership team since 2015. I grew up in the YMCA/YWCA and started volunteering with a focus on international relations a few years ago. Through this, I was able to attend the European and world-wide YMCA general conferences several times. In summer of 2007, I met a few people from Armenia at an ESG (European Scouting and Jungschar Group) seminary. A year later, we held an ESG Leadership & Training seminary in Armenia. It was a fascinating and spontaneous time. I very much enjoyed the Armenians' hospitality and met young Armenians from all over the country. After that, we travelled around the rest of the country, visited Spitak, met many friends, ate delicious food and saw many ancient monasteries and churches. I was very impressed with the friendliness and hospitality with which I was met in Armenia. I'm very glad to be a part of the partnership team today and hope to visit this fascinating country again soon. 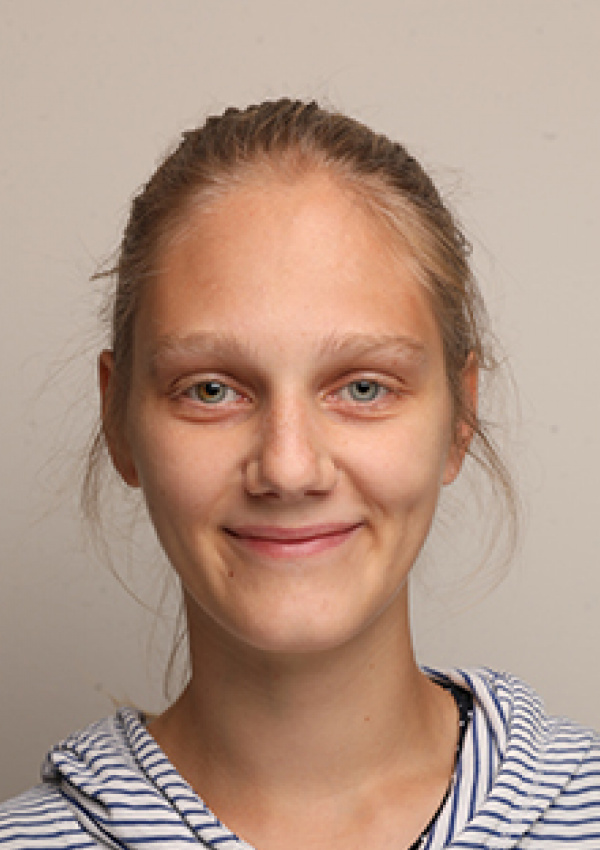 My name is Patricia and I've been a part of the Armenian partnership team since 2018. A long time ago, a friend invited me to go to the YMCA with her, and she also inspired me to get involved in the Armenian partnership. My local YMCA group is the YMCA/YWCA Zurich 10. There, I met people from Armenia for the first time, when they joined in our summer camp. I was always very interested to learn about these people and their country. I've been to Armenia several times now, and I always look forward to seeing my friends again. Besides being in the YMCA, I study psychomotor therapy and I recently spent an exchange semester in the Netherands. I also love to play sports, so I always look forward to the Kick for Spitak sponsorship tournament. In my free time, I also do Judo and teach children my skills. 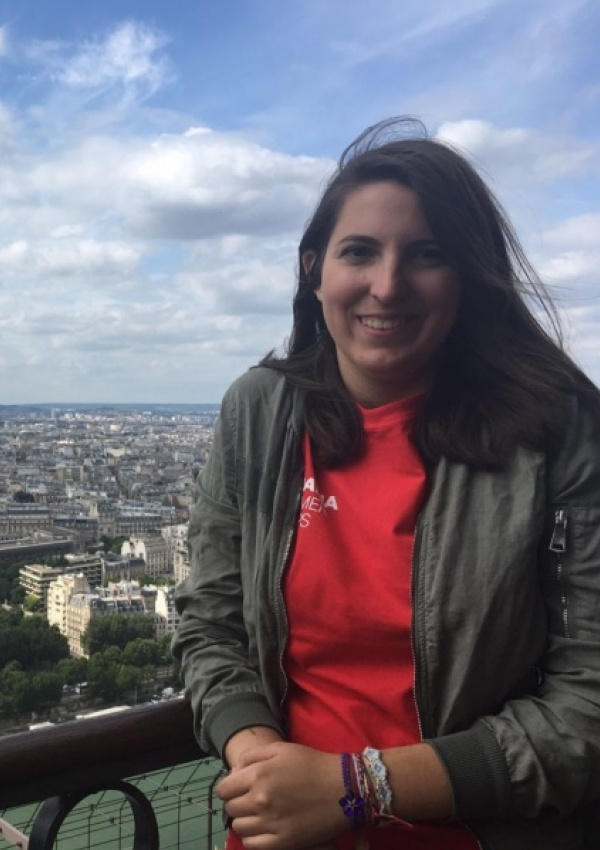 About me: My name is Amber-Louise Renold and I've been a member of the partnership team since fall of 2016. Some of you might know my sister Eugénie, who was a member of the team for a long time.

I didn't know a lot about the YMCA/YWCA Zurich until then, as I lived in Aargau and was never a member of any scouting group. I do, however, feel a strong connection to Armenia. I am half Armenian on my mother's side and always felt very connected to my Armenian roots and identity. When I visited my home country for the first time, on the YMCA/YWCA Zurich's educational trip in June 2016, I felt the need to leaarn more about this country and to get involved somehow. Of course, I also wanted to keep in touch with all of the lovely people I met! I hope to visit Armenia again soon and look forward to all the coming challenges in the partnership team.

Are you interested in joining the Armenian partnership team? Get in touch at armenien@cevizuerich.ch!